Aurelia Script - Isn't it supposed to be dead simple?

May i know where you saw the instruction of npm install? There shouldnt be any. It is indeed what you said: add a script tag and go.

He was talking about the readme on github repo.

I have created a PR based on the feedback here, it’s at https://github.com/aurelia/script/pull/27

I searched for “aurelia script”, landed on the aurelia/script github page and saw “NPM INSTALL” immediately. Being one Guinness in, it violated my expectations of the most simple instructions possible (since simple is supposed to be the point here). So I guess you could say it failed the “one Guinness test”.

My initial thought was, “maybe the NPM INSTALL thing is targeted at contributors, and is not required for potential users”. So I went to the first linked examples on codesandbox, copied and pasted the three files into my legacy asp.net mvc code base, and tried it out. Unfortunately, it didn’t work the first time because I did not specify the root as root: '/myvirtualdir/app.js'.

This morning I was able to apply the tiny bit of critical thought needed to solve the problem. I must say that this is awesome that this works as a drop-in script (esp. for my legacy project)!

I think I was expecting to see the most simple example (the first linked example) printed directly on the readme.md as three code blocks under a “Quick Start Example” header (or something like that). Having to click to another page and grok the format of codesandbox, as simple as it may be, was still an extra click into the world wide web.

It should also include a note instructing the user to make sure their “root” is setup correctly. Ex: root: '/myvirtualdir/app.js' (in case you are using IIS locally instead of some lightweight http listener).
The codesandbox examples could still be shown as links below the most simple example.

So to summarize, I tried this at the end of the day, and that definitely impacted the experience, but I’m happy to see that it was just a very small bump in the road.

That sounds awesome! Is this a work-in-progress?

Its already merged. Just waiting for @EisenbergEffect to release it. You can check the 2nd latest PR in the script repo.

About your case, i would be so nice if you could help adding some more text to the readme to help future devs.

I’ve read through a few posts in regards to using aurelia script and I have no issues running it with the popular browsers. I also understand the dependency on Dynamic Injection requirement that IE 11 can’t handle. From those posts I’ve read it seems there are ways to run aurelia without transpiling that will work in IE11. We use aurelia extensively on our suite of web apps but we’re wanting to also use it (mainly for our large aurelia plugin (components, services, etc) within an existing 3rd party platform we use where we build out single views that run inside the aforementioned platform. They run in an iframe (I know…yuck) to securely run views along side the platforms views which allows us to “customize” workflows and add/improve functionality. So it runs a single html page and I’m looking for a way to easily drop in one (or a few) js files that will allow us to utilize aurelia’s binding and templating. It has to support IE11 and devs would write in ES5. Is there any examples out there of what scripts to include (including any required polyfills) and sample code on initializing the app and using a plugin and it’s component? I’ve tried aurelia script and just kept running into walls. Thanks!

I will point you to a repo that use es5, au script running on ie11, no transpilation, dynamic/lazy loading with requirejs, an a sorry for the walls.
Would you like to help after that with a bit more doc in a PR?

Thanks @bigopon, look forward to the link. Yes I would like to contribute if I can. I’ll look into putting something together after I get this one going.

Here is the basic of the basic:

Is that activate lifecycle method required or just an example?

Its an example. Added to have more es5 feeling 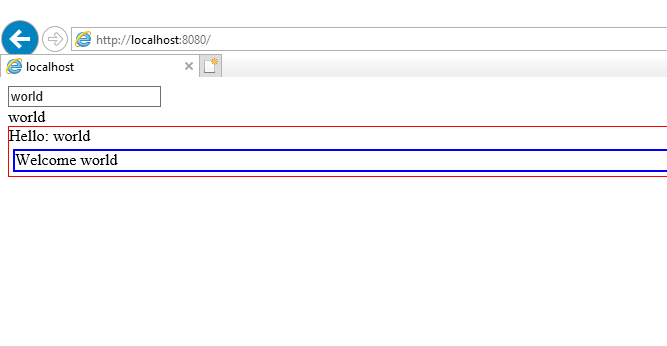 If you want to avoid loading scripts dynamically, via requirejs, you can use static view (example in welcome.js):

If your view has some dependencies:

@bigopon I think we need to aggregate all of this into an official document for the site. If you take what you’ve already written and merge it with some ideas here…shouldn’t be too much work. Do you think you would have time in the next couple of weeks?

@EisenbergEffect I would love to have these documented. Though let’s invite community member @rkever to help us with this first. Could you please @rkever help with some awesome doc?

This is beautiful. Few other frameworks can do this <3

@bigopon & @EisenbergEffect I will definitely help out with docs for this. Although this is not an ideal situation, I’m sure there are other enterprise companies with similar requirements and feel this could really be helpful until we can rid ourselves of IE. I’ve been able to run it successfully and use the template engine but running into issues with trying to figure out the DI for the views after the viewmodel loads. It’s probably just my lack of understanding how to make it work without the ES6+ methods of DI and not knowing the correct ES5 methods for loading views. What I’m trying to do is build out some components (possibly in a plugin) that is included in “single script” solution I’m making where a dev can just drop in a script that has all the dependencies to run a single view and build out some basic UI using our customized and brand styled components. Most of the projects consuming this are single views that will contain mostly form type elements (grids, inputs, lists, etc). They are running inside a secured container (currently an iframe) inside a large web solution. Often we need to add functionality or “redo” existing functionality that’s lacking and the app solution allows for “custom pages” which run a single iframed page. Hope that all makes sense.

I’m also planning on using requirejs for at least some basic DI and is common enough I feel other non-frontend devs can pick that up well enough.

As you can see from the example, all the code are plain old JavaScript code, and all exports from Aurelia can be retrieve from global namespace au, so there shouldn’t be anything blocking you from providing a seamless DEV experience for IE11.

Update: I have the framework working well and I’m building out components and services. What I need to figure out is how I want the DI to work for components and services. My initial thoughts is to provide a mechanism that allows either loading only the components used for the view or to load all. This way it won’t be so heavy in the case of simple views and they can DI each component they need. For edge cases where they will be using most, they can just opt in to have all components loaded globally at run time. I have a few other projects on the go so this is moving forward slower than I had hoped but still moving forward nonetheless. Once I have it all setup, I’ll provide my solution and some documentation.

Thanks much @bigopon for your help. It saved me a ton of time!