My ultimate goal was to get bootstrap tooltip to work. The steps above is how I was able to reproduce an error I’m having with my project. I want to simplify it and remove doubt about something within my project.

@y2k4life can you share a repository so that I can look at it?

I noticed the validation was my own additions I removed them so that my repository would be more like the skeleton-navigation repository.

Here is my repository to reproduce the error.

I noticed using Chrome there is an additional Event Listener when import ‘bootstrap’; is used. It looks to be jQuery. If I remove the Event Listener it works. But I can’t have $(’[data-toggle=“tooltip”]’).tooltip() without jQuery and Bootstrap. 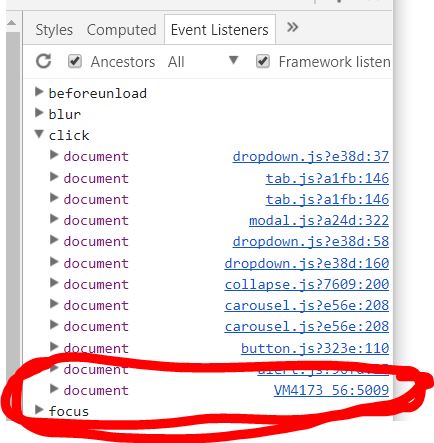 Which points to this.

Don’t know why or what, but this was a try anything and everything until it sticks.

I read a blog post, unrelated other than Webpack and Bootstrap, In the blog article the individual components of Bootstrap was loaded. So, instead of loading Bootstrap I loaded collapse and tooltip. Also had to load $ from jQuery separately. My repository is updated to reflect these changes.

Remove the comment from import ‘bootstrap/js/dropdown’; and it breaks.

More experiments to be done, but regardless of why as to why this is not working I’m just glad I found it.

Another thought, how does it work without even using import anything

Found out it does not break, it just does not, how to say this, auto wire up the event. If you add the code below it will work with import ‘bootstrap/js/dropdown’. I just don’t know what the magic

is that wires this up with HTML only and having no import ‘bootstrap’ in the JavaScript. How does it work with HTML only? What identifies the HTML as having data-toggle=“dropdown” and then knows to load import ‘bootstrap/js/dropdown’ and then to call ** $(’.dropdown-toggle’).dropdown()**. Furthermore why does adding Bootstrap in JavaScript kill the magic leaving one confused.

Why don’t you try

it is the bundled version, in which all libraries are included

I used in one of my repositories both tooltip and dropdown of bootstrap v4-beta.3 and it just works fine in all browsers. It’s loader is fusebox and using another skeleton though.

I encountered this issue, its caused by the duplication of jQuery across both the app and vendor bundles.

I created this issue for it here: