Greetings.
I am currently trying to migrate our Aurelia 1 project from the very old aurelia-bundler (not the cli-bundler but the one used by old skeletons) + jspm to dumber.js, since it apparently supports Aurelia 1 with aurelia-deps-finder. We use TypeScript with tslib.

I have managed to at the very least build something, but there seem to be several problems with dependency injection which prevent the project from even starting:

This is the error heading:

Please note that none of these problems occur with the legacy builder, which however we would like to migrate away from because of its age and some limitations (e.g. lack of ES6 syntax support).

Sorry for late reply. I will look into it today.

Meanwhile, if you can share a minimal repo to reproduce the error, that would be helper for the investigation.

I am not sure I can provide a minimal reproduction since our system is quite complex and stripping out the unneeded parts is not easy.

I can however provide some pointers:

Problem 2 seems to be solved by explicitly registering the required component, though I do not know why this was not needed before

I do not know why this was not needed before. For reference here is the ApplicationState initialization (which I have not changed).

Maybe some of these modules have some special requirements or need to be initialized / registered in a special way?

Problem 3 is definitely due to our unorthodox view location mode. I have to look into how to configure it. As of now I have noticed the old version used SystemJS and full URLs to identify modules while the new version only uses a local module path.

Problem 1 does not seem to be present after solving problem 2 and putting tslib in the prepend section.

This is the relevant part of aurelia, which loads the module:

I assume require is dumber’s module loader.
The viewmodel is resolved correctly, but the view is not.

The main problem is that in our case the viewmodel and view have different paths:

Note that our views are NOT bundled; they are generated via Razor (ASP .NET Core) on the fly.

This is not a problem when using the legacy aurelia-bundler, which uses SystemJS and uses a full URL as moduleId: in this case it is possibile to override ViewLocator.prototype.convertOriginToViewUrl with our convention.

In short, is it possible to instruct the loader to look for viewmodels and views in different places?

Another update: my current plan is trying to adapt DefaultLoader and aurelia-bootstrapper to our needs; however due to other priorities this migration will have to wait.

Thank you anyway for your attention.

I found this is a bug in dumber-module-loader, it behaves different than requirejs when loading an absolute module id “./foo” (requirejs treats requirejs("./foo") as if it’s requirejs("foo")).

That causes the edge case when using globalResources() in src/main.

In comparison, globalResources() call in plugin index file works fine, because it’s loaded by requirejs as a relative module (resource ./foo/bar related to plugin-name is resolved to module plugin-name/foo/bar). But the usage in src/main.ts is trying to load it as an absolute module.

I have now fixed the dumber-module-loader bug. You can do a fresh npm install (remove node_modules and package-lock.json). Those DI and view things should work.

Let us see if there is other issue surfaced up.

As for the remote view template loading, if all your html templates are in folder templates/,
You can force the paths mapping in dumber’s option for any module starting with “templates/…”.

This mapping to absolute path will force it to ignore baseUrl setting (/dist by default).

The path option does not seem to work, though our templates do NOT actually start with templates; I might have described our use case incorrectly.

As an example, one of my modules is found at widgets/AutoComplete and called such.
What the application currently does, with the legacy aurelia-bundler and a specific configuration in ViewLocator (as described in the documentation), is:

Again, the /templates is not part of the module name but it is added by the ViewLocator (I guess I should have posted this snippet sooner, I think it was adapted from the old skeleton):

What I want to do is intervening between steps 2 and 3 to tell the loader something like:

If this was already obvious I apologize.

So far I have tried with custom forks of aurelia-default-loader and aurelia-bootstrapper, but to no avail. I have also tried following the code in dumber-module-loader, but it is both quite complex and difficult to debug since it gets embedded in an already minified state.

Sorry for late reply.
I have not used ViewLocator. I will do some testing and get back to you. It’s probably because I never used this feature, so I missed something in dumber’s Aurelia support.

No problem.
For a more specific reference (and kind of a proof that something like our method is somewhat officially endorsed), this is our approach (first section).

From the original ViewLocator, I think you removed return id + '.html';, why?

Here is a demo for using ViewLocator with dumber bundler with the help of “paths” options. 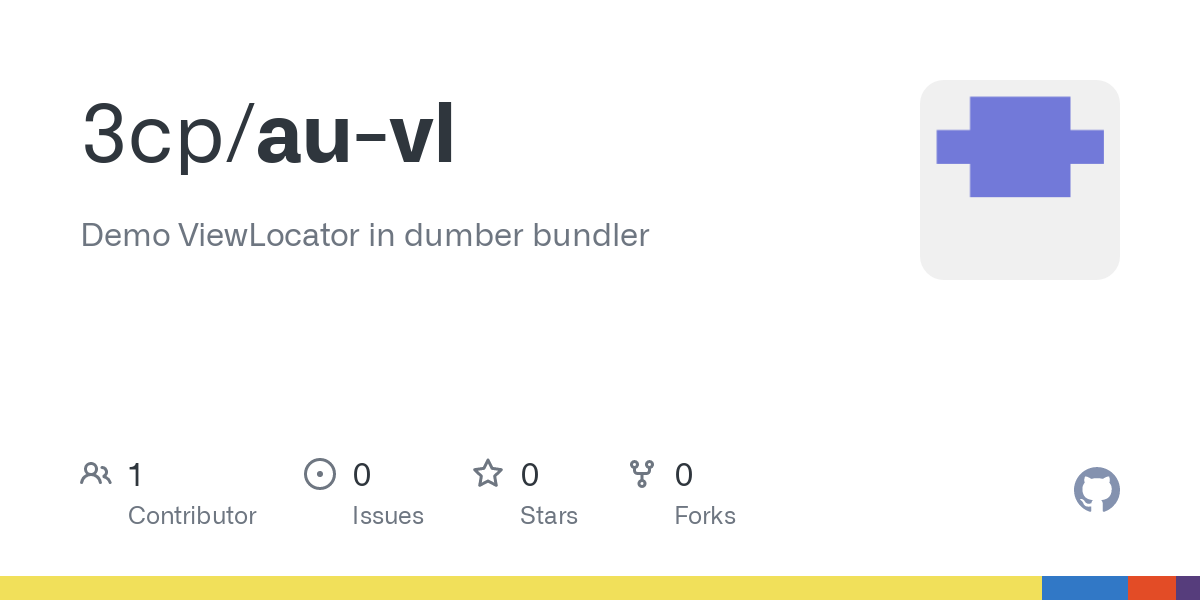 Demo ViewLocator in dumber bundler. Contribute to 3cp/au-vl development by creating an account on GitHub.

From the original ViewLocator, I think you removed return id + '.html';, why?

I cannot speak for the original developer of this part, but I am pretty sure this is because our views are dynamically generated from an ASP .NET Core controller and therefore have no natural extension.

However, by configuring our controller to accept and strip away the .html extension the locator works correctly. I guess this is more of a general convention problem of what to do with extensionless paths.

Some early inputs and notes for now, which I will have to investigate and try more thoroughly:

As always thank you very much for your attention.

If you can share a minimum working repo that reassemble your production setup in CLI Bundler, I can check why it didn’t work on dumber.
For those dynamic generated views, you can use the nodejs dev-server to mock up I guess.

In gulpfile, you might need to add *.cshtml to the list of sources.
Dumber does not touch any Aurelia internally, the dumber-module-loader is an AMD loader which Aurelia supports through aurelia-loader-default package.

I had some time today to look into this more carefully and I wanted to share some notes with those interested:

As for the aforementioned dynamic runtime dependencies, I have looked into the documentation and found the deps option which seems what I need, but I cannot manage to find a way to include specific files.

How do I include these files in the deps configuration (assuming it is the right place), so that they are available via loadModule("moment/locale/[locale_code]")?

I have tried some combinations with no success, but I figured asking here could help someone with a similar problem.

For future reference, I plan to switch to Day.js once some dependency issues are solved; its locales should work the same as Moment’s.

As a follow-up for the above, for now I have decided to just manually import the few locales we need, in which case loadModule works correctly. I guess there is not much difference between this and meddling with deps/append/prepend.

Those deps/append/prepend are for legacy or weird packages that doesn’t follow standard, you don’t need to use them.

Status update.
I have upgraded to the latest dumber version: the major issues I had seem solved, and I finally managed to produce a working configuration.
This issue can be considered solved. Thanks you for your work and attention.

A relevant note is that my problems with tslib and prepend were due to the fact I used noEmitHelpers; switching it to importHelpers solved my compatibility issue (notably with some d3 packages).

Some more notes I noticed which might help those in need: