Long time Aurelia users probably remember we had gistrun to share Aurelia code, then we moved to codesandbox for better user experience. But none of IDEs on the market supports Aurelia 2 yet.

For last few months, I have been busy building a brand new online IDE, Dumber Gist https://gist.dumber.app , the successor of our gistrun, runs on dumber bundler (the successor of aurelia-cli built-in bundler).

It’s getting into shape. Today, I am very happy to invite you for a semi-public test!

We would love to see you to start sharing your code/bug/idea in Dumber Gist in our discourse forum and GitHub issues. Use the share button in the app to get a shareable URL or an iframe snippet (Note discourse and GitHub doesn’t directly render iframe in user’s post, for obvious security reason).

What’s different from other online IDEs?

FYI, I upgraded one of my doc sites from a customised Aurelia app to plain jekyll GitHub pages, showing code examples in iframed dumber-gist.

It looks much cleaner than before. It’s also much easier to maintain, as all examples live in GitHub Gists, I don’t even need to bundle them locally.

as a person who is entirely crippled without my init.vim i would appreciate an easy way to export/import. saving it as a gist and downloading it does not seem to preserve directory strucure and there’s no obvious good way to re-import it other than via gist.

GitHub Gist itself doesn’t support directory. dumber-gist, inherited from gistrun, use \ instead of / for the directory, so that the file name is acceptable by GitHub Gist.

In eyes of GitHub Gist, file src\main.js is one file name without directory, that’s what happened when you download the file directly from GitHub Gist.

I am also a vim user (vim mode in sublime). https://github.com/dumberjs/dumber-gist/issues/22

BTW, currently you can drag a local folder/file to the dumber-gist window to import multiple files.

yeah, you can definitely work around the issue, even using the gist. might be fun to write a cli app to dl it, fix the directories and leave behind an import script or something.

to drag things i’d have to install a gui file manager, not worth doing for something used this rarely (for me).

it sucks being particular about what software i use

The only challenge is that I want to implement it in frontend as much as possible, because I don’t want to add functionality to backend. It is doable to have a virtual server in ServiceWorkerWare.

Don’t tell me you actually use lynx or w3m browser?

the only X11 things i use are i3, firefox and st (terminal emulator). oh, and feh for viewing images.

anyway…you wouldn’t necessarily need a backend for it if you had an option to import a known format.

There’s gotta be a way to simulate the drag and drop into the browser window without a GUI file manager, but it is probably more trouble than it’s worth.

FYI, a non-trivial code base running in dumber-gist.

Code is copied from https://github.com/michaelbull/aurelia-hacker-news
Made few small fixes for running scss and tsc in browser.

This is awesome took a few minutes to load but still wonderful. Great work!

Thank you!
First you should see speed improvement of similar projects after that first load (after you got local cache) of a certain framework (aurelia for instance).

Where you are? (because it’s cached in cloudflare’s cdn.)
Also what’s the speed of your internet connection?

On a fast connection, an aurelia (1 or 2) app will take up to 30 secs to load in first boot for your browser to download the cache. Projects on other frameworks have less delay. The slowness of aurelia is due to we ship multiple npm packages, and multiple files per package. This level of modularity imposed performance difficulty on dumber-gist which runs bundling purely in browser, because of the latency of downloading multiple files.

Aurelia 2 will mitigate this issue by shipping one js file per npm package. To be done before production release.

Finally, no more trickery with jspm for Typescript to work. 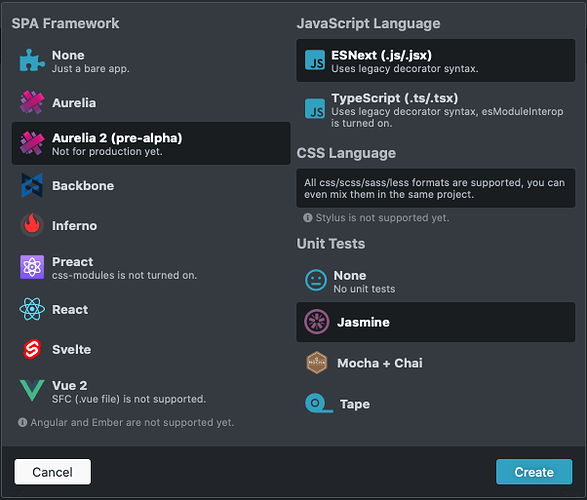 Does it bundle on the server?

The bundler bundles purely inside your browser. Wiki has more information. https://github.com/dumberjs/dumber-gist/wiki

FYI, I upgrade the doc site of another project of mine, from customised aurelia app to a generic static github pages site with dumber-gist iframes.

@gimerstedt there is now an UI option to turn on vim mode in code editor (codemirror).

does escape leave insert mode but also de-focus the editor or is that just me? think i disabled all the vim-related plugins in firefox.

edit: i did not disable all vim-related plugins, both c-[ and esc work just fine.
edit2: when temporarily disabled, Vim Vixen enables itself on every rebuild of the code, hence the confusion.