I have just installed latest aurelia-cli 1.1.0 and the environment files (dev.js, prod.js) are no longer in aurelia_project folder but in config folder and they are .json files rather than .ts. Is this inentional? From which version, I cannot find any mention of this in release notes. Thank you!

If you look at run and build task files, they are merely alias to npm start and npm run build. Basically, webpack runs directly by webpack without aurelia-cli magic (or should I say trouble).

The package.json listed those scripts.

The env files are now handled by a webpack plugin app-settings-loader by @Sayan751, instead of handled by aurelia-cli gulp task previously.

We will update doc for this change. You can still use au run, but you can directly use npm start.

correct. and the new way to import environment is

Also trying to update my code with this refactoring…

I am used to create more environments than just the old “dev.ts” and “prod.ts”. For exemple I used to have “stage.ts” file with values fitting our staging environment. Now with the new /config/environment.json structure I haven’t found how to start the application with staging values.

What I’ve tried is to create a file called /config/environment.staging.json and then run the app with

But it didn’t work

What’s the correct way to do this ?

The webpack setup has changed. We need to bring back customisable new env file. But right now, you need to update webpack.config.js to make that work.

The old au run --env prod still works because we had some code for the backward compatibility in aurelia_project/tasks/run.

But by default the webpack setup only checks production env, you can update two lines in webpack.config.js to support environment.staging.json.

env files are handled by a webpack plugin now. 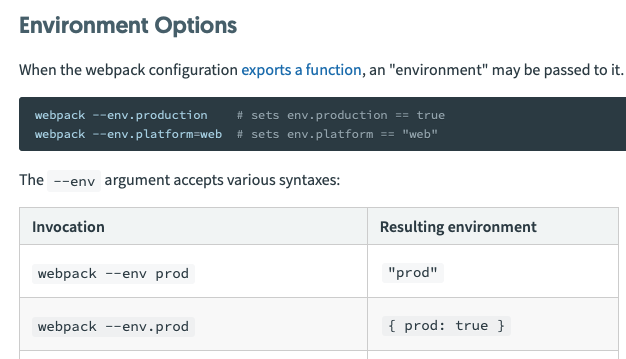 Sounds good to me. We should do that. Probably release this with the next major version.

This environment variable config stuff is a mess in aurelia-cli 1.2.3…

I tried doing what you said environment.stage1.json or stage2.json, and added the correct code to webpack.config.js and package.json scripts…

Sorry, our doc is definitely not up to date for it.
Can you show me your webpack.config.js and package.json?

au build doesn’t quite work at all.

aurelia logs say “config/environment.json” is the only one ever transpiled.

If you want to have a 1 to 1 mapping between your config file and the environment, then you can do something like this.

But when you run it:

Not correct I don’t think (I have no other way of checking if it loaded).

Also wish we could do a const somewhere to define our array of environments that are meant to be used as production vs development:

I think @Sayan751 can update app-settings-loader to allow keys that not defined in default environment.json.

@huochunpeng Now I see the actual problem. Thank you for pointing that out.

I would like to point out that this is intentional. From the loader documentation:

Merging configurations : The merge operation keeps the schema of the base file intact. That is, no unknown properties or property value of different type, from the customization files can be applied on the base file. This makes sense because during development you expect a certain set of keys and values of certain datatype to be present in your config and you program against this known schema. Therefore any new keys present in the customization file cannot and should not play any part in the source code.

I would like to ask @ArchEnemy how you are going to use these (temporarily non-existent) config parameters in code?

I agree with you (I must have missed that part of the documentation, if it was more prominent I might have read it with more attention). Though I wish an error was displayed when keys were added by accident, if I ran into this, there will be several other devs who will run into the same issue. There’s just no easy way to debug what has gone wrong. Things like webpack and environment don’t make things easy to test so they should be better logged.

But again, I just created it npm run build:stage1…

I even changed environment.production.json. nothing is registered. Nothing seems to change the chunk file in dist folder no matter what you change.

If I run as “production” it still doesn’t do it. At some point it started doing it, not sure why but only for production. The logs always say: [BEPO] ./config/environment.json 50 bytes {0} [built]

However, if I add a new “npm run start:stage1” vs “npm run start” … everything is working as expected successfully. The two environments print out correctly.

I can’t run dist/index.html locally as there are pathing errors. But I’m checking app[chunk].bundle.js and it has the old data. Is it cached?

Would it be possible for you to push your reproduce-able code to a GitHub repo?

I couldn’t really reproduce the error, but after some different compiles eventually the change propagated to that JSON.parse. I had to use a small static webserver to test the dist/ folder as well to see if it worked with a console.log(environment).

Also the last issue that remains is that au build --env.environment=s1 seems to transmit that to webpack as webpack --extractCss "--env.environment=s1" <— see the double quotes? I have to use npm run build:prod or npm run start:s2 instead of au build or au run.

Not sure why it puts it in double quotes and so it doesn’t seem to register the variable.

I got it to work when i added

to the package.json scripts section and then call it with npm run build:int.
But i had to adjust webpack.config.js like suggested above by adding integration next to production variable.