I have to mention that what @EisenbergEffect have said is a plain truth, since “I do not have time” is equivalent to “It’s not my priority”. I am not sure what exactly is the roadmap or aims to pursue in AUCS, but I would be happy to contribute, as far as I have time for

. Having said that, since one of my problems with Aurelia at first place was the lack of UI frameworks, not the only one though check here, after talking to @EisenbergEffect on Reddit and private chat on gitter, I have decided to develop bunch of tools for the community, one of which is components on top of bootstrap, you could find a NOT-Production-Yet version of that here, and the reason I said "as far as I have time for " is that work-in-progress repository for the Aurelia and community. Yet, it would be grateful to help the community as we are investing our future self on Aurelia so that the richer the community the better future.

@shahabganji thank you for your message, as it told me more than I would normally expect. Probably the key piece is I am not sure what exactly is the roadmap or aims to pursue in AUCS. Since I wrote a lot about the mission, it means that I likely wrote too much and managed to overrun people’s stack

I would help me if you could read my executive summary of AUCS and tell me whether that tells you what is AUCS reasons for existence. If you still feel like helping after you read that, let me know and I will add you to the team.

I apologize that this is just my personal comment,

Unfortunately, I still see a lot of general titles, no more. Writing an article on which subject and topic? Are its strengths and weaknesses clear? I think we need to get a plan more than collecting people together. If someone agrees with our roadmap, they will come to us on their own.

For example, I and Mr @shahabganji needed some components for the UI (aurelia-toolbelt), so we made a roadmap, and we both implemented one by one (and, of course, continue to do so) If someone helps us, we will be happy, otherwise we will continue because our plan is clear. 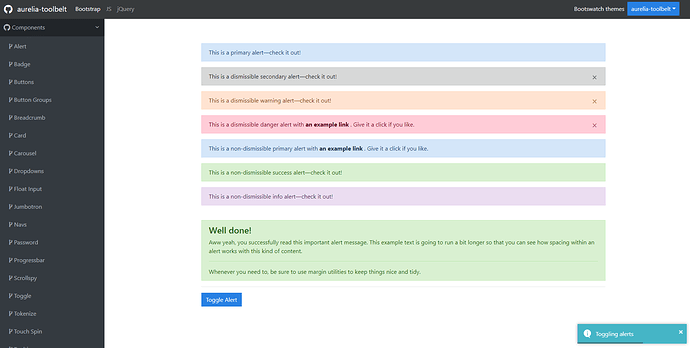 I suggest you write a roadmap in detail first and then define a project based on that, then form a community based on it. In this case, we will help the Aurelia community purposefully.

Also, We can even use Mr. @EisenbergEffect and other members of the core team advice in this regard, which can provide the Aurelia community for improving the current situation.

@HamedFathi thank you for sharing your view. Two comments from me:

Hi, I would like to join and contribute as well!

My GitHub username is cabouchard.

Welcome @cabouchard - I just created your invitation like all others before, please start here and add any issues that you find as not well defined by adding to the just started topic AUCS - getting close to a group start

Thanks for helping to make Aurelia more popular and improving docs.

In a few initial discussions we may have a team that will create Aurelia Bootstrap (v 4) bridge as a part of our bridges collection. The fate of this will be determined by a survey presented by the (yet to be finished AUCS Portal).

As you likely know, the very first documenation task (assuming that it does not get voted out) is the document that at the moment lives as this gitbook - where a large section is dedicated to @JeroenVinke & Co. as data to be used to further enhance CLI functionality to the point that it can generate the functional equivalent of Aurelia Navigation Skeletons.

Thaks for your interest - the invitation was sent:

Please start here to learn about the basic structure of AUCS organization.

Thanks for the invite @adriatic. I have an idea for a skeleton-navigation example using the cli and devextreme, essentially replacing the GitHub “users” view with a view with the Devextreme data grid integrated. The component has nice functionality for paging, search, sorting, etc. I turned to this after writing that functionality in Aurelia. Not easy tasks. Is this the kind of thing you envision for the CLI compendium section? Thanks. Steve

Your idea for CLI compendium section is a variant of the “theme” I used to sketch my own prototype of the same document. It is not a secret that one of the immediate tasks for the Aurelia CLI core team is to expand it to the point where it can be used to generate all of the current navigation skeletons. This would be a great feature for all Aurelia users (developers, that is), so when I started to think about helping Aurelia Community this came to my mind first. Parts of that Guide are written as input for the CLI team, actually (Hi, @JeroenVinke

Here is a brief genesis of this concept:
Being a member of the team that delivered Aurelia [KendoUI / Materialize . Syncfuction] bridges, I learned that there is a strong interest in expanding the Aurelia skeleton-navigation samples to add a tab that shows a imple component from a bridge - see the introduction chapter from the Aurelia KendoUI Bridge Documentation book. While this Guide was written for Aurelia KendoUI “subset” of Aurelia Community, I realized that the idea of using the well known collection of navigation skeletons as a tool to introduce other concepts, seems pretty powerful. Applying this idea to other “areas of interest” resulted with several similar books, as follows:

While I will write a more precise version of this article as the information needed for one of our early surveys, these few paragraphs may help understanding what is that I expect us to do: describe all major topics of common interest (application generation, language environments, loaders and binders, continuous deployment and integration, identity management) using a set of well known samples. For folks with inclination for math, our task is really a set of all ordered pairs (x,y)(x,y) with x∈Ax∈A and y∈B (aka Kartesian product) - A being a set of all major topics of common interest, and B being set of all well known samples.

Little fear that we could run of tasks for our project, particularly since I described a few of my ideas, which I hope to use as inspiration for AUCS team where nearly everyone is a lot smarter than me

Hello Alex;
There are a lot of people struggling to do integration with AdminLte. The Reason I decided to stay aside from Aurelia though it is my favourite framework is the lack of Admin Templates.
I am highly interested in your achievements. I would appreciate if you would share a modified template that support Aurelia or Explain how to achieve that.
You can contact me at amourrashid@gmail.com
Regards

A definite Must-Read for people in this group. I am sure many people know it already but this is succinct as it gets when talking about CLI vs Skeletons.

I am sure that Dwayne will allow me to expand his description of the Aurelia Skeleton relationship with Aurelia CLI a bit more:

You can see more about the AUCS code samples here, including the details of creating the future skeleton with today’s CLI.

@adriatic Thank you for working on making Aurelia popular and known as I think lots of developers out there are missing out on this awesome framework. I would be interested in contributing any way I can.

My attempt to organize aurelia community members into a group that would work on expanding the collection of Aurelia Guides has been received with less excitement I would hope for. The most often quoted complaint is that just the GitHub infrastructure I created to be able to synchronize the contributions from the team of 25 (that was the number of people that stated initial interest to contribute) is too complicated that folks do not have the time to “understand” this infrastructure. I was also asked to reduce the number of my AUCS related posts.

As it is always smart to accept anyone’s critical comment as a suggestion for improvement, I took that approach, stopped creating discourse traffic and continued that effort with just a couple of developers. Please contact me via aurelia-community/lobby Gitter chat-room if you do want to join, so we can discuss the available tasks and process for creating contributions.

Hi @amourrashid. Sorry for the delay.

I’m honestly very interested in documenting the steps involved with integrating Aurelia and AdminLTE. Unfortunately, I’m certain the effort we’ve invested would qualify as intellectual property for my employer.

If someone can recommend another AdminLTE-like framework, I’ll be happy to figure out what’s involved to get that working.

Aurelia is already great. Microsoft have let the side down by abandoning the Aurelia SPA templates which always ensuring a working Visual Studio 2017 project whatever the versions of NodeJS and npm dependencies installed. This could result in Angular taking over in due course possibly sooner rather than later since it takes too long to get software updates and working correctly without undue side effects. Many adopters get frustrated and can and do waste a great deal of time. The question everybody asks developers is how long does it take to…

It doesn’t have to be such a mission. You can take the misery out of package updates with ncu which is itself an npm package.

The only time it let me down was when it updated a project to Bootstrap 4 which is full of breaking changes. From a JavaScript perspective it was compatible, but updating all the markup to suit 4 was too much of a mission. To revert Bootstrap you just edit package.json and re-run npm i