If I bind an array to a repeated custom element, the attached() is called for each instance of the custom element. But when I clear the array (using myArray.splice(0) as suggested elsewhere), the custom element instances do not call detached. Additionally, by repeatedly adding items to the array and clearing them, I see that my memory consumption steadily increases.

In my real-world implementation, the custom element instances each subscribe to EventAggregator - and because detached() isn’t called, I’m unable to clean up.

Your demo does detach for me in both Chrome and Safari.

Thanks @huochunpeng, I missed the fact that the sandbox console wasn’t scrolling to the bottom as output arrived. Unfortunately I do have this problem in the production code - I suppose getting the sandbox to exhibit the same issue will be my best way of finding the root cause.

Thanks for looking in any case - I’ll post back again if I draw another blank.

Okay @huochunpeng, I’ve revised the demo to fully-reproduce the issue I’m seeing in production. From some background, in our code we use a set of custom elements for our “dropdown” like this:

In the View for <cc-dropdown> we use a slot to place the repeated <cc-dropdown-item> instances.

With the codesandbox updated, you can open Chrome’s Task Manager and reproduce as follows:

I started to wonder if the use of a slot in <cc-dropdown> has anything to do with it, so I created a second codesandbox with a simple use of <ul> and <li>. With the same steps above, repeatedly adding 10,000 items and then clearing, I see the “cleared” memory consumption rising although at a much slower rate than with the 1st sandbox.

Disregarding the statement earlier about detached() not getting called (which was a brainless tangent on my part), I’m now back to the heart of the issue - what appears to be a memory leak. Our users reported the application was coming to a crawl, and the browser tab crashing, when using a specific dropdown in the app several times. We found that the dropdown was being populated with WAY TOO MANY items - but even with the number of array items reduced to a more reasonable level, we’re still seeing memory consumption rise over the course of the user’s session.

I think I recognize the leak, it’s been fixed here https://github.com/aurelia/templating/pull/678

we will need to ping @EisenbergEffect for a release.

Thanks for notifying about this.

@EisenbergEffect is this next release of aurelia-templating, to include PR 678, major or minor (semver)?

@mcorven It has already been released. It’s only our official release notes blog post that is a bit behind. That is scheduled for this week.

@EisenbergEffect oops, sorry for that, thanks for the note.

Can you try update aurelia-templating to 1.10.3 and try again?

@bigopon With 1.10.3 installed in both the sandbox and my own app, the situation is consistently improved. I’m still not seeing all the RAM released though. Below is a log of actions against the sandbox (with 1.10.3 installed) while monitoring the consumption using Chrome’s Task Manager on the sandbox’s iframe. FYI after each action I waited 10-15 seconds for things to settle down: 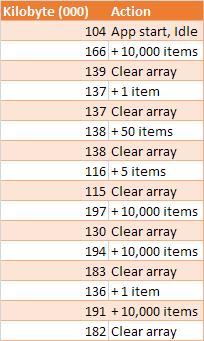 here is my test: 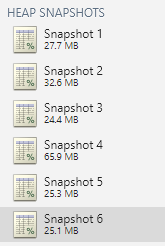 I think you need to open the app in a separate window to test, instead of testing it in a sandboxed tab. The button to open the site is on the right, as you can see here

did you run it with templating 1.10.3? And im not sure why the difference

Yes I was sure to update the sandbox to 1.10.3. The good news is that the exponential consumption has resolved with 1.10.3.

Glad to hear that. Because i cant replicate the leak on my side