What in the world is the mission of AUCS

AUCS is created as a consequence of my very strong belief that:

b) Note that I am pointing out a strong difference between the Framework Developers and Application Developers, despite the fact that the intersection of these two classes is not empty. I spent about half of my life writing “system software” , including Operating Systems, System Drivers and Firmware and the other half writing applications where I will mention world first implementation of the patient centric web portal in partnership with Microsoft’s HealtVault team, some 14 years ago (citing as the evidence that I can speak with authority about the concept written by Aurelia developers for Aurelia developers

c) We need a team that is a lot larger than Aurelia’s core team in order to deliver a lot of very well written guides, blogs, tutorials, code snippets , etc. - and until now, we had a very few, some of them organized by @mobilemancer, other by @EisenbergEffect (both of which are also members of the framework aka core team).

d) In order to ensure the best possible outcome of AUCS, the community members will be asked to participate in all decisions (via surveys that will soon be added to our website (see next item below)

e) Our first deliverable - AUCS website, visually similar to the official Aurelia Website was first time deployed today, only 6 days after the realization that we ought to have it in order to publish our materials continuously and without interference with the core team (see next item below)

) . Such independence (read lack of the need to ask for permission to do something) is the only way to create what we plan to do, without overloading @EisenbergEffect with AUCS management tasks.

g) Most important part - AUCS website should be considered as the “aggregator and a transient station” between the Aurelia Community and Aurelia core team headed by @EisenbergEffect, meaning that it offers a data buffer content of which could be asynchronously moved to Aurelia proper website. To further facilitate this, all of our data is formatted as markdown files - AUCS website just provides structured interface to this data.

Using this summary, perhaps the details written in all related articles below might become more clear. I would really appreciate everyone’s feedback (in this Discourse tool, privately via Gitter or email (nik@aureliatools.com), as the success of this “community movement” depends on clarity and enthusiasm.

this sounds great and more straightforward than the other topic, I would be grateful to participate, however, I am not yet an Aurelia professional, but I’ll try my best.

@shahabganji The fact that you find yourself not yet an Aurelia professional may limit your highly technical contributions, while it makes you very valuable participant in the discussions about what should AUCS coverage topics be and how complete the released documents are from your point of view.

@adriatic Great write-up.
To emphasize some points with which I strongly identify I would like to quote part of @jsobell’s well articulated opinion from reddit :

we’ve probably lost 50% of people who ‘tried’ Aurelia simply because they floundered in the myriad of options, incomplete examples, and non-working web examples dues to the shifting bases

@shahabganji Aren’t you the author of the toolbelt ? Perhaps you are being humble when you say you’re not “an Aurelia professional”. I looked at your work and it’s very, very good. I think it would make Aurelia shine. I’m looking forward to using it (I’m on BootStrap 4). As you wrote, it’s good that “a full documentation will be also provided for every part” so people like me can use it

@shahabganji if @frankmonroe is right in his comment above I made silly encouragement for you, so I am joining @frankmonroe’s joy to have you work with us

Yes, @shahabganji and I are the authors of the aurelia-toolbelt. But what can we do? Now we have a complete list of controls that we need to write (in 5 levels of priority). You can see part of our roadmap in the picture below 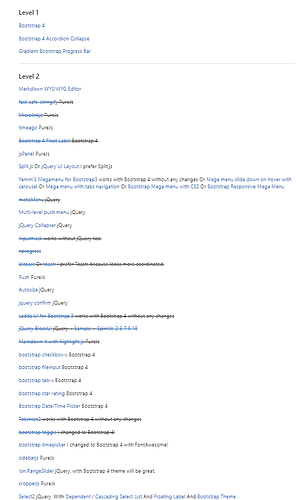 We are new to Aurelia, like many others. Both of us are not an Aurelia professional / a front-end developer In fact, we are a .NET programmer. So it will be very difficult to help those who are professional in this field.

I think it would make Aurelia shine.

It will be our honor

I believe that by next month we will be able to complete the version belong to Bootstrap 4 with its documentation. stay tuned

Please tell me your feelings about this demo (not so good I know) or @shahabganji . We will be very pleased.

@HamedFathi and @shahabganji
If my impression that you are most interested in creating Aurelia tools / libraries is correct, it might be good to mention how your toolbelt project may fit perfectly in our community groups Aurelia-Tools and Aurelia-UI-Toolkits.

As you likely know this AUCS community is dedicated to creating great technical documentation, where the development tasks are limited to samples covering all topics we plan to document.

So, we would love to have you join either (or all) of our groups

Hello guys, sorry for not being able to make a post earlier, so disconnected from the world, Thursdays and Fridays are weekends here and #FamilyTime, I just take an hour off to make some comments

@frankmonroe, I am one of the authors of aurelia-toolbel, that does not mean that I am an expert in front-end developing though, I am not humble, I am realistic

, and I am so delighted that you liked our work

@adriatic, It would be my honour to join the groups where many professionals are participating in, so I can learn many useful things, and I would be grateful to play a role in Aurelia community. As I mentioned here, I am currently working on aurelia-toolbelt in my spare time, but I assure you to take part in other community activities as far as I have time, believe me despite what I said about time and priority I do want to have a richer community than other js frameworks cause Aurelia deserves it. and no encouragement was silly, as what you are doing makes me, at least to be more determined

I guess @HamedFathi will agree with me, to publish what we planned for aurelia-toolbelt, so many can contribute, make comments and feedbacks, come up with suggestions, and so on, should they find it useful for the whole community. This would be done after we upgrade the package to Bootstrap4 and some useful documentation get published.

And last but not the least, how can we join the groups, that you mentioned @adriatic? I already joined the gitter group

Sorry guys, my time is up

, see you all tomorrow at #AureliaFamily

I look forward to hearing your comments and feedbacks.

Your attititude expressed as

I assure you to take part in other community activities as far as I have time, believe me despite what I said about time and priority I do want to have a richer community than other js frameworks cause Aurelia deserves it. and no encouragement was silly, as what you are doing makes me, at least to be more determined

makes me very happy to invite you to our AUCS group of Aurelia developers. as we briefly discussed in the Gitter chat rom January 19, 2018 12:54 PM , once you see what are the AUCS projects about, you will decide about all possible contributions to Aurelia that suit you best.

@adriatic
Keep up the good work, more blogs, tutorials and youtube is so important for Aurelia to survive.

@adriatic I would also be interested in contributing. I’d be interested in starting a conversation about best practices when using aurelia. one way or another too much flexibility works against people just starting. defining a favored way to do things will make startup easier. given that the aurelia community is relatively small, agreement might just be possible.

for some context, I do use aurelia professionally in a ~30k line project. because of this, I’ve been able to notice how certain things work best in large apps.

Your profile and stated interest with the specification of a theme conversations about best practices when using aurelia might be one of the hottests topics so far.

Your invitation is created - and like all previously team members, please start here