Tutorial Code and The Real Aurelia

I’ve been working on that this week. In addition to a reworked tutorial, expect a tutorial course on Aurelia University that covers the same topics.

May I know which parts you felt irrelevant? From what I see, Aurelia is still 1.x.x, which means most the code from alpha stage until now are expected to work like they have been. There maybe some new ways of doing things but that shouldn’t make those examples, videos or tutorials irrelevant.

When you have never worked on a framework before, and you are trying to learn it, and almost none of the examples work as is but have to be massaged in some unknown way, it makes learning the framework very painful.

Example two: the current “au new” defaults create a project that uses webpack, and either creates (or doesn’t) create certain files referenced in the tutorials.

Since the documentation on Aurelia does not match what you see when you try to use it, you start looking to other sources – videos; books. But the vast majority reference ways of doing things that don’t work anymore. If you massage this, or massage that, it might work. But, you have to go somewhere else to find out what to massage.

Again, if you are not new to the framework, no problem. If you are, it is frustrating and makes you want to go somewhere else.

I’ve not been able to get on Aurelia University. Signed up for updates ages ago. It is still coming soon 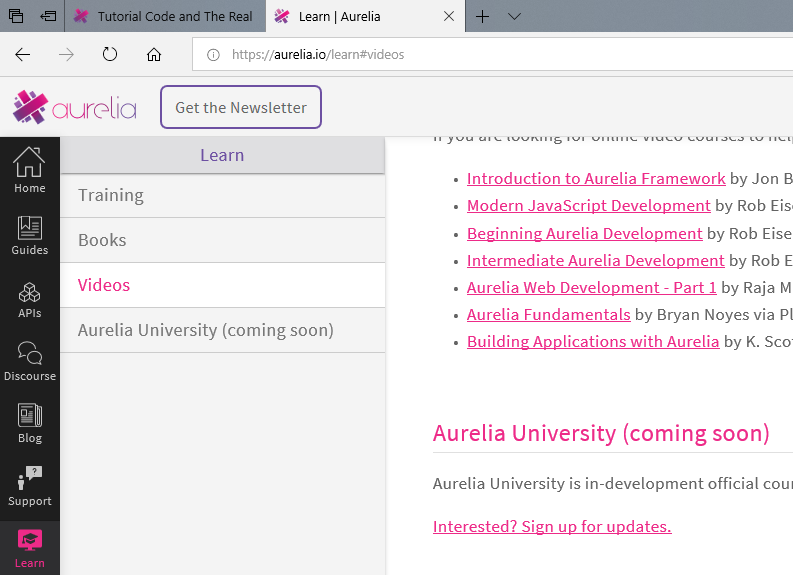