Is there a fear of release?

I have been working with Aurelia v1 since early beta version. I have also been playing with Aurelia 2 and I think it is amazing. I have so far not come across any obstacle that would force me to use v1 instead of v2.

I have been looking at the issues that now are part of upcoming alfa/beta and v2 release. From what I can see there are no major blocking issues. I think the team has made an awesome job so far with both v1 and v2. My point is that I think Aurelia would benefit from a release to v2 with a possible list of “known issues”. Then plan for a 2.0.x release every two months with what ever is complete at that time. My fear is that the polishing of functions and features most developers will never encounter drags out to forever.

My question is really; Would there be any harm in releasing v2 now?

Same here. Have been using v1 since early betas and have an client app developed built on it and running since then. I’m only waiting for the first beta release (as company policy discourages using pre-beta versions) to migrate

As a maintainer of a large plugin, Aurelia-Slickgrid that is, there is no clear path or any info whatsoever on how to migrate a plugin from Au1 to Au2. Perhaps that is just missing documentation on how to do it, but I still think that piece is totally missing and I’m not sure it would be a good idea to go without proper migration docs. Basically, starting from scratch is not always possible and without proper migration docs in place, not just plugins but everything really, it would be too early to release Au2 without any clear path. I’ve put thousand of hours to build Aurelia-Slickgrid over the years and if I have to redo the plugin from scratch and/or if I have to put an extra few hundred hours to make it work… well let’s just say, I’m just not gonna do it. Angular has really good migration website and scripts that you can execute which does a lot of the work for you, but I never liked their crazy cycle of releasing 2 major breaking versions a year.

Also another thing that is missing in my own opinion, is that it doesn’t currently work with Vite (which is quickly surpassing WebPack in terms of usage). Will it require drastic (aka breaking) change in the core for it to work? If so, then it would be better to do it before an official release. Having used Vite with Vue for work, it’s really hard to go back to anything else (Vite uses ESBuild which is amazingly fast)

Maybe another reason for being in alpha it that the API may still change somewhere?

True, alphas might have API changes. But as the first comment states, it does not look that way. And some of us have been using Aurelia v1 since early days and are really eager to have at least beta out.

I also used Aurelia v1 since early betas, but with v2, so far I had bumpy experience, every time I’ve tried it.

Also, as far as I understood, router implementation had to be swapped with temporary solution and final incarnation of router still to be integrated?

From my point of view, it’s too early. Areas where v2 lacks for me:

I guess, I miss aurelia-cli and build steps as independent Typescript files.

While I have not been following the development, I have noticed several open RFCs / proposals (e.g. this and this).
While more features and shortcuts would no doubt be useful, I fear wanting to release a fully featured v2.0 hurts the already slow pace of the project. I think it would be better to focus on producing a stable v2.0 with feature parity with v1 and leave non-essential functionalities for v2.Xs.

Tbh, I think the community is waiting for a reply by any of the Aurelia developers. #hint

Well there’s a difference between a

(I can recall a post on this blog 2 years ago: “we hope for a nice christmas gift”, referring to (beta) release of Aurelia2 in December 2020)

Some great questions. We indeed had some trouble defining the “last pieces” before going into beta.
Right now, as we have decided, that it will be: Getting the router docs to a satisfying level. @dwaynecharrington and @jwx are getting close to finishing line for the router doc.
Unfortunately, we cannot give a timeline, even for such a simple looking task.

Personally, it won’t be painful upgrading, though I can help porting if help is needed.

Convention has some issues with the way Vite works, afair, because Vite is built with assumptions that aren’t easily overcome. We’ll look at this again. For now, you can always do

Apologies for the very late response!

Personally, it won’t be painful upgrading, though I can help porting if help is needed.

I certainly would like help on the matters, I’d be more than happy to receive a PR directly on the Aurelia-Slickgrid repo and/or get some kind of migration guide to follow. I couldn’t find much so far.

I would also happily help anyone with community plugins porting over. I’ve ported a few to v2 myself.

PR would definitely be welcome to support Au2

I love Aureliav2, am using it. Great job to developers, but please allow an environment of intense criticisms so that you can release an amazing new Au2!

I’m sure some of you already thought of these bullet points, I’m just giving you a handy list:

I feel like the team is doing great work and making huge progress. I’ll be sure to help advertise when it’s out and develop plugins. Yes don’t make perfect the enemy of the good, but it’s hard to say when something is perfect enough for a good release. Improvements are still needed.

Sorry if I’m repeating myself (post above), but I just gave a latest shot to npx makes aurelia now, after reading (relatively) recent comments. (This time I used dev version, because of previous issues with latest) 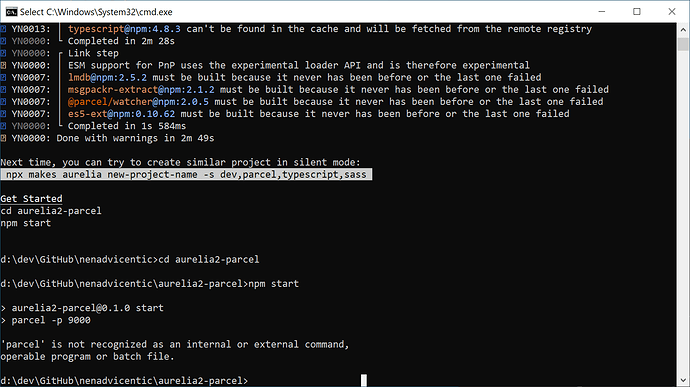 I do believe that this kind of issues have to be solved before Aurelia v2 goes live. Similar issues were present in aurelia-cli for certain combinations and for sure they contributed to poor adoption of v1.

Scaffolded projects should work fully, before the final release. For example:

UPDATE
Added an issue: 'parcel' is not recognized as an internal or external command · Issue #1573 · aurelia/aurelia · GitHub to the scaffolding-templates repository - GitHub - aurelia/new: The Aurelia 2 scaffolding repo used by our tools to setup new projects.