We just upgraded to Visual Studio 2017 15.80 today and our Net Core Aurelia application no longer starts up. We have not changed any files at all. Has anyone else had this problem? If so how to get it working again?

Looks like aurelia-loader-webpack failed to include aurelia-framework dynamically. maybe @jods4 (current lead of the plugin) can tell. While waiting, you can bootstrap manually instead of relying on aurelia-app attribute

I’m not sure I fully understand what to do. Would you or anyone else have any code we can try? Is it json, typescript, or c#? Still using the old Microsoft SPA templates which worked until yesterday. We are fairly sure Visual Studio has done something behind the scenes. They don’t say what they did apart from changing defaults to TypeScript 3.0 but it was a massive update using over 1.0Gb download for Visual Studio 2017 Community edition. Is anyone else using Visual Studio 2017 with Net Core and Aurelia?

For those who are using Visual Studio 2017, the node_modules folder is only corrupted when explicitly selecting ‘Restore Packages’ which wrecks the project. The npm packages have the exact version numbers specified in the package.json file. As long as ‘Restore Packages’ has not been invoked all the npm packages in node_modules are present and correct. The dependencies/npm shows yellow warning triangles but the project builds and runs correctly for all features when in this rather fragile state. (see below). Closing Visual Studio and reopening the project still allows it to startup. 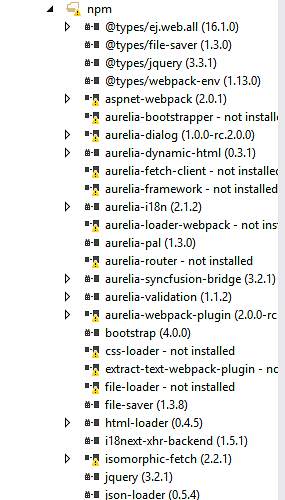 This can be fixed but takes a long time since Visual Studio easily loses sync and the Visual Studio versions of NodeJS/NPM tools sometimes take over from those already installed causing further errors. Noticed another version of Visual Studio 2017 is now available. Version 15.9.2 works fine.

npm i is easier than VS UI